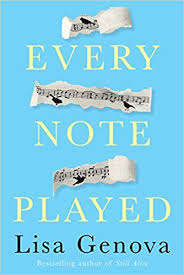 This is a very easy book to read. By easy I mean it has a well-paced, flowing narrative. It is populated with accessible characters. But that’s where the easiness ends. The rest is very difficult. I was already in tears by page 63. So you’ve been warned!! But do read this book. Even if you’re not habitually a reader……..please……..read this book.

If I may quote from the novel, ‘He knew that Lou Gehrig had it, that Stephen Hawking has it, and was peripherally aware of the Ice Bucket Challenge. That was the extent of his knowledge on the subject, and he wasn’t seeking to know more.’ I suspect that more than sums up many of us. It seems somehow fitting and karmic that this book should be published so close to the sad demise of Professor Hawking as public awareness of ALS may already be heightened and floating in the collective ether. Reading this book will tell you practically everything about Motor Neurone Disease in powerful detail .And the great strength of this book is that it doesn’t do it with clinical, factual detachment, it does it from the sufferer’s perspective, and his aides and carers. You would think that in order to do this so unflinchingly well the writer must actually suffer from a form of MND. But I don’t believe that to be so. It is one thing to do impeccable research and observation but quite another to render all that into such palpable, empathic yet informative prose.

However to make the story ‘just’ about a concert pianist felled by a crippling illness might not cut it. Instead Lisa Genova expands the tale, like a improvised musical composition, to show the effects the situation. has on others’ lives. Not merely from the everyday, practical applications of caring for someone with such an horrendous condition but how that condition causes others as well as the sufferer to contemplate and maybe atone for their pasts. Not wishing to give anything away there is a curious kind of redemption at the end of the book.

The main characters, Richard and Karina, are not especially warm characters! But I think that makes the story all the more potent. It makes you think of the old adage of not wishing something on your worst enemy. Their daughter, Grace, is softer but still potent because you feel so much for how she has to deal with this situation.

The title ‘Every Note Played’ holds meaning on several levels; for Richard because he has played all his notes, the disease has seen to that. The writer offers us a blow by blow, every last detail of ALS’s destructive power. And the book itself is like a concerto; three movements, pre ALS, during ALS and post ALS.

Very hard to say that this is an enjoyable book of course but I am pleased I have had the opportunity to read it. Thanks to Readers First and Allen & Unwin for the opportunity.