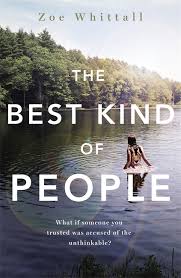 Zoe Whittall is a new writer to me and I am most pleased to have made her acquaintance! Although set in North America and seen from those perspectives legally and sociologically this current work is pertinent and topical to issues in the whole of our muddled world today. Whilst it offers no answers it does highlight the impact on friends and families in a compelling and compassionate way.

George Woodbury is an upstanding citizen of Avalon Hills. From a privileged background George gained an heroic status by defusing a potentially tragic situation when his daughter was seven years old. Ten years later George faces accusations of sexual misconduct. What follows is something of a ‘did he, didn’t he?’ type tale and I have no intention of becoming Ms Spoiler 2018 by divulging whether he did or didn’t! However the focus is very much how this situation influences the lives of his immediate family and their relationships and on a broader level raises awareness of how society as a whole responds to female voices.

The novel details the varying points of view and the different ways in which people respond and deal with George’s basic accusation. In some ways I found George Woodbury himself to be a minor character in the book, whether that was intentional or not I’m not certain. I didn’t warm to him over much but as readers I felt the writer was inviting us to reach our own conclusions about him whatever the final outcome of his trial.

We are somewhat used, nowadays, to hearing of such cases on the news. Sometimes we become almost immune to the headlines, high profile for a few days then being sidelined as another piece of news takes over that big profile spot on the front pages. But we don’t always get to see and understand the effect on the family. This book attempts to allow us a glimpse into the crumbling lives of a family torn asunder by allegations they can hardly believe.

Ms. Whittall draws her characters with love and understanding but that is not to say she allows sentiment to cloud the issues. George’s wife Joan swinging like a pendulum between acceptance and denial seemed very believable and the decisions she made were also very convincing. So, too, George’s daughter Sadie, intelligent, almost stereotypical rich girl but not quite. Her confusion was almost palpable at times and some of her actions understandable because of it. George’s son, Andrew, a member of the legal profession and having escaped the parochial small town returned to support his family in this time of crisis and possibly ends up adding to his own crises.

No book is perfect and there was some stereotyping and some sections lacked credibility. There is no real redemption in the book but I never felt that was the intention. I thought it was about examining attitudes and effects and asking questions for the reader to ponder long after the book has been read.

Without wishing to ignite non pc gender issues I did wonder fleetingly how different a male response to this book would be from a female’s?

I found the book absorbing and engaging. It was by no means uplifting to put it mildly! But anything that makes a reader think on a deeper level than they may have done previously is no bad thing. My thanks to Hodder & Stoughton for the opportunity to read this story.