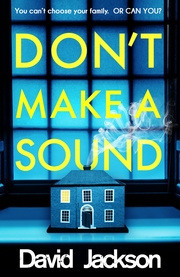 I was unfamiliar with David Jackson’s work and the Nathan Cody series before reading this gripping new thriller from Mr. Jackson and I was worried that my ignorance of the first two Cody books might inhibit my appreciation of this third one. Not so. If anything it has made me want to see exactly what happened to Cody prior to this!

This is a most disturbing and uneasy read. I think that’s true of any story where you have children in jeopardy. It is a chilling tale. It’s fairly slow to start, with a clever opening chapter that persuades us to think that we have a nice cuddly story of a middle aged couple’s devotion to one another and their family .The revelation that all is not as it seems is one of those chilling moments. I don’t do spoilers or give anything of the story away if I can help it so I’ll say no more.

The plot is relatively straightforward for the majority of the book with an unexpected twist at the end that could do with a little more exposition. But it’s a real ‘never-saw-that-coming’ moment which, as thriller readers, we all love don’t we? Isn’t that part of the reason we read thrillers? There is a romance type sub plot amongst the police officers which I don’t think adds a great deal to the story as a whole other than offer us a little character development but the ultimate relevance may be better understood by having read the previous Cody novels.

The characters for the most part are believable in that the villains are suitably villainous but I did have problems with one of the children who at ten had an enviable emotional intelligence and whose cognitive processes exceeded those of many adults. It just didn’t ring true. Crucial to the plot without a doubt but if you’re a stickler for realism it might grate.

However nothing is perfect and nit picking is not a fulfilling pursuit. It’s a rollicking good read and it has the potential of an ‘unputdownable’ . A straightforward narrative well paced as a thriller should be. There’s lots of nasty bits, some not very nice bits and some in-between bits. I’m not sure that all lived happily ever after but this is no fairy story. It should satisfy Mr. Jackson’s existing fans and I’ll be surprised if he doesn’t gain a few more on the way.

My thanks to Readers First for the opportunity to read and review this book.