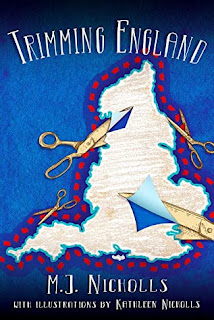 My first perception of this book was that it would be a charming little novel expressing discontent with the state of our nation. I read the blurb and imagined a story set in Jersey with a number of irritating people and I thought the story might revolve around how they might be irritating each other when placed together in the same location. Oh, how wrong could I be?

This is unlike any story I’ve read before. The premise is that the British Prime Minister decides to rid each English county of its most irritating citizen by sending them to a horrible hotel on the island of Jersey for sentences of varied lengths.

Taking each county in turn M.J. Nicholls offers us its most irritating citizen stating their name, their age, their sentence and their crime. What follows is a tour de force of creative and satirical imagination. Some had me almost crying with laughter. For example Somerset’s most irritating citizen, Wilbur Austryn, 63 years old was sentenced for 10 years for creating an offensive index in the fourth edition of the Somerset Hill guide! I quote, ‘ Staple Hill - as Fats Domino sang: “I found my thrill, nowhere near this smelly scrofulous chit of a hillock.’ Of the 40 or so hills featured Wilbur has nothing good to say about any of them!

But behind the wit and humour I extracted a more serious intent - a satirical and perceptive observation of our society, currently. I had a sense of Spike Milligan meets Charlie Kaufmann. There is an absurdity to some of the unlikely situations but sometimes the absurd gets closer to the truth than the truth itself.

Nicholls has a way with words that I envy! I sometimes wondered if some of them were of his own invention - ‘blabberoonification’ - my spellchecker could only shrug and say “no results found“. But each word was just so perfect and conveyed exactly, I hope, what the author intended. Certainly this reader found them perfect. It’s a kind of improvised prose, spontaneous prose such as Kerouac produced. Perhaps one of the best, or more accurately, one of my favourite entries is for Warwickshire. It’s blistering prose that just begs you to read it aloud, barely pausing for breath, like a virtuoso instrument break. And there are plenty of literary and musical allusions throughout the book. Mr Nicholls is culturally enhanced.

Illustrated by Kathleen Nicholls, a relative possibly? It matters not. They are an appropriate addition with their deceptive simplicity to the stories they accompany .

In one sense it’s hard to place this in any specific genre. It could be seen as a collection of flash fiction. But it’s one of those books where you just know that it’s okay to throw genres out the window. It won’t be to everyone’s taste, sadly. But for those who read it and enjoy it and appreciate the creativity, their lives will be richer for it.

My thanks to New Books magazine for a gifted copy.