If Mary Shelley subtitled her book ‘A Modern Prometheus’ then I guess this could be subtitled ‘A Modern Frankenstein’! Since the blurb gives little away I will not go down the spoiler path intentionally but it’s going to be tough trying to avoid some fundamental themes within the book without letting something slip.

I read this within a 24 hour period. It was tempting not to try for sleep but I did. ’Unputdownable’, ‘page turner’ are all epithets we offer freely and glibly sometimes when we’re talking about books. But sometimes it is so true you have the red eyes to prove it. This is one of those books where it IS true! Your heart will feel like it’s on a trampoline it ends up in your mouth so many times. And if you have an Alexa you might not by the end of the book.

If you’re a devotee of psychological thrillers you might be reminded of J P Delaney’s The Girl Before but that’s possibly a thematic comparison rather than a plot comparison. The emotional dynamic of 17 Church Row is broader and more explosive. 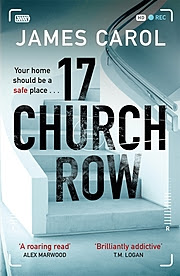 It’s an ambitiously plotted novel that sends the reader up many a garden path as you, along with the hapless Rhodes, trust and believe, at face value, what you see before you. But delve a little deeper and the seeds of unease start to take their grip until they won’t let you go.

Nikki and Ethan Rhodes have suffered the ultimate loss, their child, Grace. But Grace was twin to Bella, who hasn’t spoken since her sister’s death.  Needing to try and move forward the Rhodes relocate from a house full of memories to the titular Church Row house designed by a whizz kid architect, Catriona Fisher, that has an advanced home security system that reduces Alexa to a charity shop bargain.

I will not divulge any more. It’s a clever book and doesn’t deserve to have that shattered by a clumsy reviewer revealing the salient points although, my goodness, I sympathise because I would like to shout out and show you all the clever bits!

Interestingly I thought, for a male writer, the female characters were very well drawn and the fewer male characters seemed weaker. But the majority of your empathy is reserved for Nikki and Bella as you will both of them to cope with their respective traumas.

The narrative hurtles along at a compulsive pace with a chronological narrative for the most part interspersed with some italicised chapters that deal with a past, and some clues if we did but know it!!

The conclusion is open ended and quite chilling. It’s not a book that leaves you with that snugly warm, satisfied feeling of all ends being tied up. You’ll be looking over your shoulder and viewing life with suspicion for a while after reading, I reckon!

You can enjoy this story for what it is, a darn good thriller, or you can seek to delve beneath and extract a deeper meaning perhaps that has something to say about our contemporary, digital, techno world and its potential future. Or you can do both ! Like me!

My thanks to Reader’s First for a copy.
Posted by Bookphace at 14:49