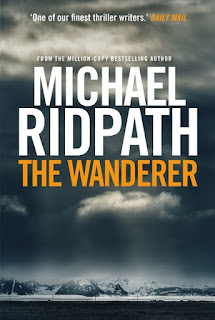 Michael Ridpath has written umpteen books about policeman Magnus Jonson but this is my first one. There seemed to be several references to a past that might be worth exploring in previous books since Magnus seems to be a likeable, if ever so slightly flawed, character, personable and zealous in the execution of his duty.

Since I don’t believe in coincidences and having very recently read The Sealwoman’s Gift by Sally Magnusson I’m wondering if this is the year of the Icelandic novel for me?! Certainly the tale does credit to the country, aside from the crime of course! The writer conveys a real sense of Iceland; what it is to live, work and travel to and from a country deemed to be the most sparsely populated in Europe.  Clearly he loves the country. The book is rich, too, in the history and legends of Iceland and it is that which provides the catalyst for the fiction. Yet the book has a truly international flavour. An Italian tourist is murdered close to a location where a documentary film crew are making a film about Gudrid The Wanderer. When there is a second murder it becomes clear that this is far from being a ‘simple’ crime.

What follows struck me sometimes as a cross between Dan Brown and Stieg Larsson, Icelandic style!! It’s a myriad spider web of blurred lines and half truths, tangled relationships, red herrings and twos and twos making fives. But as with most crime stories you know as you are reading that the perpetrator is there right in front of your eyes. But can you make the right connections? Can you get there before the police do? I found the plot enjoyable and thought provoking but I can’t say why or I’d have to indulge in a spoiler and I’m just not in the mood!!

But in fact there was more than one plot at play in this engrossing story which bulked it out a bit. But if I’m honest I’m not sure exactly what it added to the book as a whole other than allow some character development for Magnus.

Although blurbed as a thriller I feel that is a little misleading it’s more an historically flavoured crime fiction. It’s easy to read with a comfortable narrative style from an experienced writer. It must surely satisfy fans of Ridpath and Magnus and gain some new ones in the process.

Many thanks to Readers First and Corvus books for the opportunity to read this. Michael Ridpath is now definitely on my radar.