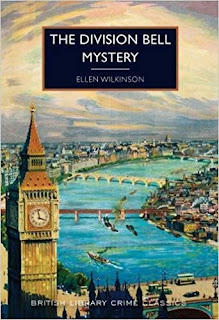 Originally published in 1932 this novel is written by the Labour MP Ellen Wilkinson famed for her role in the Jarrow Marches. It’s a mystery set in the Houses of Parliament where a prominent financier is found dead. A handsome young parliamentary secretary, Robert West, finds himself playing the detective alongside the police and some friends and colleagues in an attempt to unearth what really happened.

Clearly Ms Wilkinson was well placed to write from first hand knowledge of the workings of the parliamentary machine. Her characters must surely be observed from people she knew and worked with. Most come across as very believable although there did seem to be some caricatures and I wasn’t sure if that was intentional or simply my contemporary response to a past culture. Although this is a mystery novel I felt it had much to say about the place of women in government and society at that time.

The mystery itself is quite enjoyable although even given the lack of forensic and digital tools that we have today I think the police might have solved things a little quicker than they actually did but we wouldn’t have had a  story. It’s very much a locked room crime tale that unravels alongside some observations of the state of `British politics and the politicians of the time. There is a sub plot that threatened to cloud the main issue but in fact fleshed out the text quite cleverly anad hinted of the more dubious activities of government representatives.

The writing itself is crisp and faintly satirical, implicit rather than obvious, but it all flows along effortlessly. It’s pretty well plotted. The only time I’d ever heard of a Division Bell before was the Pink Floyd album!! I told you I wasn’t political! I did suspect the ultimate perpetrator but not the finer points of the crime.

I’ve yet to come across any of the British Library Crime classics that I haven’t enjoyed and this is no exception.
Posted by Bookphace at 12:05