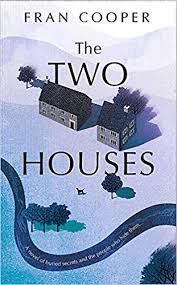 If you’re hoping for a light hearted, feel good read then this might not be the book for you. But if you’re up for a primal, sometimes ethereal story of buried secrets and crumbling lives with a hint of the supernatural and spiritual then look no further than this, Fran Cooper’s second novel. For I strongly doubt you'll be disappointed.

There’s something of the familiar in the idea of two southern city dwellers disappearing into the depths of northern, rural England hoping to rediscover themselves with a suspicious tight knit, closeted community reluctant to welcome them. And if I am pressed for anything resembling criticism of this work it is that there is some stereotyping. However there is no such thing as perfection and this did not detract from my overall enjoyment of this book.

A bleak atmosphere was created of this hamlet, think, possibly,  Royston Vasey but without the comedic element. Eerie and creepy though much of the descriptive passages are many of the characters attempt to be as normal as they can with varying degrees of success! I thought for the most part the characterisations were well crafted, particularly Heather, and Tom. Although they weren’t essentially the main protagonists I found them more accessible than Simon and Jay who I found it hard to engage with initially. I thought it was clever for it seemed that the reader, too, was made to feel that Jay and Simon were outsiders. But I did feel that Jay’s character developed believably as the novel progressed and I was rooting for her as I got to know her better,

Jay is a ceramicist and Simon an architect and I enjoyed the word play with section headings relevant to both disciplines. The notion of two houses being divided and then made whole again is a pleasing if less than subtle metaphor for some of the relationships in the story. And this is a very pleasing book. It is well written and easy to read yet not without some substance that gets the reader wholly involved. It's not edge of the seat stuff but there were some creepy moments. It’s well constructed and the story flows to its redemptive conclusion. It's one of those satisfying reads that is economic in its language but doesn't leave anything out.

I found it quite refreshing to come across a fiction that progresses chronologically with most of the salient events from the past being divulged through the present day narrative itself. Paradoxically it felt curiously old fashioned to read a straightforward fiction and at the risk of stating the obvious I felt I was a reading a story. My thanks to Hodder and Stoughton for the opportunity to read this fine book. I’ve not read Ms. Cooper’s first book, These Dividing Walls , but on the strength of this one I want to.
Posted by Bookphace at 10:00