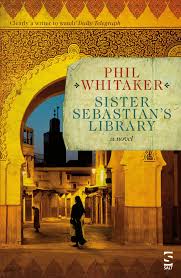 I’m always curious to know what propels a book into the wider consciousness of the book buying/reading population. Is it downright talent? Skilful marketing and PR? Or a case of right time, right place ?

For here is a book published in 2016 that found its way into my hands via Nudge Books (thank you) by a writer I have never heard of yet it’s an intelligent, compassionate book that touches on varying issues. I checked it out on Amazon and there are only five customer reviews and only two on Goodreads with eighteen reviewless ratings. That makes me feel sad as it is no better, no worse a book than many that garner several hundred reviews. But perhaps it is a perfect example of how important book reviewing and book blogging is if it can bring a worthy book to the attention of bibliophiles everywhere.

Ostensibly a missing person book; Elodie travels to Western Africa to search for her missing sister, Bridie, who is the titular Sister Sebastian. The search is somewhat metaphoric as the book evolves into an ubiquitous search for oneself on the part of both sisters but particularly Elodie.

There is a present day narrative taking place in Africa and a past narrative detailing the lives of the sisters from childhood through to maturity. Elodie is the main focus and she’s a believable, well drawn character who it is easy to warm to. Many of the other characters are functional and don’t really leap off the page at you. Bridie/Sister Sebastian is a little more developed but I guess ultimately the real story is Elodie’s.

The Western African locations are authentically described and the heat is palpable. It isn’t a fast paced book. It’s rational and considered. I found it well structured and it was a satisfying read. Without wishing to open politically correct gender issues I found it wonderfully refreshing that a book abut two women written with understanding and compassion was produced by a man.

There are several issues touched on in this book. The political fragility of the nation where it is set. The Catholic religion and its impact. Sibling relationships. Parental relationships. Friendships. Some science and biology. And that perhaps is where the book falls a little short of its mark. All of those ideas are touched on. You never get the feeling that any are expanded to the optimum with perhaps the exception of the fraternal issues. I found myself wanting more depth yet that would have impacted on the book’s length. There were perhaps too many ideas thrown into the mix.

Notwithstanding I found this to be a worthwhile and enjoyable read. Intelligently crafted it surely deserves a wider readership that it currently enjoys. Or is that just me? Read it and see……….
Posted by Bookphace at 11:12