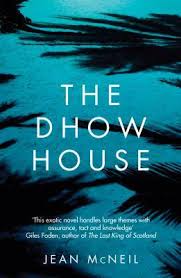 I read Fire on the Mountain and it seemed like some kind of karma that the good folks at Nudge Books had a copy of The Dhow House up for grabs. So I grabbed it!

Once again having read this book I feel like I’ve actually been on holiday to Africa, so vibrant and potent are the descriptions. But this tale is more than a mere homage to a country of paradoxical beauty and brutality. It’s a wildlife treatise to the avian bounty indigenous to the location. I loved that each chapter was the name of a bird. It’s a tale of terrorism and espionage.A story of love and the human condition. An odyssey of the eternal search for oneself. But I found too a wealth of almost philosophical aphorisms that had me turning back the page to reread and ponder. Phrases such as ‘Time is a surprise delivered in moment sized parcels’, ‘Religion was a facade for ideology, which was a facade for power.’ are just a couple of examples.

There was some thematic similarities between this story and Fire on the Mountain, an almost marginalised white family in Africa hosts an almost stranger who turns their lives inside out. It’s less cerebral here with more action and some chronological switches from present to past and vice versa. The full horror of Rebecca Laurenson;’s story and how she comes to be staying with her late mother’s sister unfolds throughout the book.

I found it hard to engage with the characters; it was as if they were all trying to keep me at arms length with only the very occasional chink in their respective armours. I did find the narrative confused sometimes and I had to re read to satisfy myself as to who I was reading about. I think overall the power of the book is dependent upon the superb descriptive ability of this writer which brings it all so alive and cements the narrative together.

It was interesting to compare with Fire on the Mountain, to see how a writer is developing and to understand their style and motivation. It’s a substantial work and I thoroughly enjoyed reading it.
Posted by Bookphace at 12:59