In Our Mad and Furious City - Guy Gunaratne 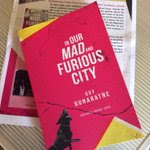 Sometimes you read a book and you feel the hairs on the back of your neck stiffen because you know you’ve read something remarkable. It’s an indefinable sensation that elevates a work beyond the mere story it sets out to tell.

And so it is with Guy Gunaratne’s debut novel. Ostensibly a tale of 48 hours on a London Housing Estate following the lives of three young men of colour, Sevron, Yusuf and Ardan.  Also the memories of two older members of this multi racial community, Caroline and Nelson, all in the wake of the killing of a soldier by an extremist.  It’s fiction but there’s so many truths here it’s like a documentary. In fact I think it could start a new genre - ‘ficumentary’.

It’s chillingly authentic with a powerful narrative that pounds along as much as Sevron’’s running and Ardan’s rapping. The rhythm of the streets, syncopated, discordant made real with words that flow like spontaneous prose, raw and alive. I’ve walked past those football cages in similar areas of London and barely given a second glance to the lads playing footie there. I won’t be able to pass any again without thinking of this story. On a visual level I was reminded of Joe Cornish’s Attack the Block. But this is not a tale for those who wish to be entertained. It’s bleak and uneasy.

What really penetrated the core of me was how little I previously understood of this environment and the people who populate it. What this book does is open up the hearts of individuals who, for many of us, are just moving images on a TV screen as we watch the news reports of the latest riots and protests, the current tragedies and atrocities, hear a few seconds of eye witness accounts before the reporter moves on. This book delves beneath the surface to examine the motivations and emotional responses of those caught up in it all and uncovers a compassion and a softness that offers some redemption against the backdrop of poverty and anger. And you think it is a book about one part of London but to me it seemed that it could be describing the whole world, mad and furious, examining extremism and radicalism and what that really means for the people living immediately beneath it’s shadow.

It’s a debut novel that almost isn’t a debut novel because it reads like the wisdom of the age. It’s a bold and substantial work. Go read it.