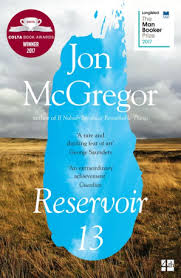 I remember the paradox of reading Even the Dogs; that such a grim, depressing theme and story could be so exquisitely written. Reservoir 13 was less painful to read on one level but no less beautiful and skilfully written.

Initially a missing girl story, but if you’re looking for a flawed narrator, fast paced psycho thriller you’ll be disappointed. This is a beautifully, controlled piece of writing, as slow, rhythmic and as languorous as the unfolding seasons described over the course of the years since Rebecca Shaw went missing. Short sentences detailing the ebb and flow of the seasons and the ongoing rural activities nestle alongside the more detailed narration of the lives of those in the village.

McGregor renders the sometimes mundane, the ordinary, the routine, the prosaic into something more meaningful through his elegant prose. It is as if he has rendered his readers flies on the wall to the lives of those in this village who have all been subtly affected by the unresolved disappearance of the girl. As with Even the Dogs there is an all encompassing sense of loss, generally, and specifically with some of the characters. The characterisations are subtle, underplayed yet all the more powerful and poignant for it.

Clever too, is the construction of the novel. Thirteen chapters, and to me, they represent the titular reservoir. Each chapter a reservoir of words and meanings. We can read what we like into that number. If you could imagine this story as an installation in an art exhibition people would be wandering round it for ages, looking at it from all angles, on tiptoes, on bended knee to try and extract every ounce of meaning from it.

I suppose, ultimately, it is a book about loss, how people deal with it and how the old adage, ‘life goes on’ is lived out with whatever consequences might ensue. That’s not a new theme, for sure, but rarely has it been expressed as beautifully as here.
Posted by Bookphace at 15:58