Bats in the Belfry - E.C.R.Lorac 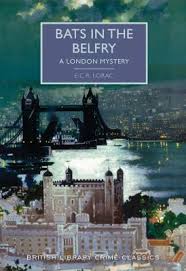 The British Library Crime Classics series must be the best invention since sliced bread! Hot on the heels of Fire in the Thatch I’ve just read Bats in the Belfry which was equally entertaining. Thank you British Library from the bottom of my heart. There’s such a glorious sense of satisfaction as you turn the last page having thoroughly enjoyed a darn good crime yarn.

This is another tale featuring Inspector MacDonald and boasts a fast paced, intricate plot set in London and conveying a suitably gothic and darkly eerie, foggy backdrop for a most perplexing and sinister crime. None of the characters are especially endearing but all play their parts thoroughly. It’s hard to like any of them but then I don’t think we’re supposed to and it allows us to remain as dispassionate and analytical as Inspector MacDonald has to be to unravel the sequence of events and arrive at a correct solution.

The plot develops in a tantalisingly ambiguous way and the reader is forced to question identities and possibilities in a relentless rollercoaster of cerebral gymnastics. Everyone, it seems, is under suspicion and the slightest action throws the incumbent into the spotlight.

The story is of its time and in its time. It wouldn’t work within a contemporary setting, forensics and CCTV would see to that but somehow that’s what makes it all the more delicious to read. I suppose there are some turns of phrases and described observations that would not make it through the Politically Correct editing stage were it submitted today but it has to be viewed in context rather than allowing such things to offend.

Some say hindsight is a wonderful thing and I wonder if Inspector MacDonald were endowed with more quirks and idiosyncrasies Lorac might have plumbed the heights that Christie enjoyed. He is rather staid but he works well within these stories though.

Now I’m off to comb the British Library catalogue for more Lorac. Not a crime, is it?
Posted by Bookphace at 16:33