The Boy Made of Snow - Chloe Mayer 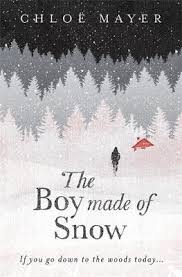 This is an extremely interesting debut novel from an erstwhile journalist. I suppose there is a temptation to believe that the transition from journalism to fiction is a straightforward one but my guess is that nothing could be further from the truth. I am often led to wonder what motivates a successful journalist to take a different path.

For me this is a typical debut novel. There is a lack of subtlety in the over abundance of details and descriptions that maybe do not allow the reader time or space to emote. There is much here to emote over! However there is also much to commend this story.

There is a dual narrative structure; Annabel, the mother’s perspective and Daniel, the son’s perspective. This device works well and the transition from adult to child, seeing the same events through different eyes, has been well composed so as not to become jagged as it so well could have done.

The characters are reasonably well drawn, functional for the most part with the main characters enjoying more dimension so that we can empathise with both Annabel,Daniel and Hans. The tensions created between Annabel and her parents/in-laws is effective in leading the reader to feel as uncomfortable as Annabel.The author does a good job of getting under the skin of a lonely, imaginative nine year old boy. The other characters do their job and do it well but we are not encouraged to engage with them too deeply.

The fairy tale theme is remarkably well sustained with quotations as headings for each chapter running through the whole book attempting to advise of an ensuing parallel in the chapter. However the traditional ‘happy ever after’ fairy tale ending is definitely not in evidence here in the slightest. And its here that for me the novel lost its way a little. For I was not sure what it was trying to achieve. There was little in the way of redemption, a glimmer of hope maybe. Perhaps it was to reinforce the fact that war reaches its insidious tentacles everywhere, not merely between two opposing armies. Or maybe to emphasise that life is not a fairy tale no matter how much we would like it to be. Or to cause us to consider the effect of fairy tales on children, exploring that fine line between imagination and reality.

Notwithstanding it is a solid debut with some originality and I’m grateful to Nudge for the opportunity to read it.