It was neither a warm day nor a cold one. It was neither bright nor gloomy. She wore her school gabardine raincoat. With a hood. She loathed it. The hood primarily but the raincoat too. Some kid had chalked ‘Kick Me’ on the back and she hadn’t been able to get it off properly. But she had been told to wear it as she sat outside on the curious garden seat her Dad had fashioned out of odd bits of old wood.

Strange day. A day of elation. But she was not a child given to any excess of emotion. Only those who really knew her could tell how pleased or unpleased she was. Last week the letter had arrived that told her she had gained a selective place at a grammar school. That was good. It was expected but still good and The Parents were pleased. As was the fashion of the time such an achievement was to be rewarded. Her reward was a guinea
pig. Collected this Saturday morning. And anyone who knew her could tell by looking at her that she was deeply elated.

The trembling life she held in her hands was the recipient of as deep a love as a child can give. She was almost breathless with the wonder of this creature who now belonged to her and was dependent on her for its well being and survival. And she sat patiently as the little furry mass nibbled and moved and snuggled in her lap. Every so often she gently raised it to her lips to kiss. It wasn’t until the sweet little pelted organism peed on her that she moved, with a reluctance to divulge the incident to The Parents who would be cross, she was sure.

It wasn’t the first pet in the home but it was her first pet. There was a cat in the house. He was a sweet natured black and white moggy called Geoffrey. She remembered the day they brought him home. She was about five years old. He was from a farm, a six week old kitten. They put him in one of those orange mesh, vegetable sacks, in the absence of a cat basket. He struggled restlessly all the way home in the car. He was fascinating. The Parents made  balls from silver foil and he chased them endlessly around the room. Then when exhaustion hit he curled up beside her in the wing chair. She was amazed that they could both fit so comfortably in that chair. But Geoffrey wasn’t hers. He was everybody’s. And that was fine for it didn’t mean she loved him any less but she knew she had to share him and he had to share his love.

But the guinea pig was different. He was hers and hers alone. There was to be no sharing. Stuart was his name. Perhaps it was because of Stuart Little but it also might have been because of Stuart at school who she liked because his mum made her beans on toast with bacon when she went round for tea. Beans on toast with bacon and with brown sauce. Stuart was albino. pure white with red eyes. One red eye to be correct. His left eye was colourless and too small. When a vet saw Stuart he reckoned that it was unlikely Stuart could see out the bad eye. She loved even more because if it.

She was ten years old and Stuart became the focus of her life. With some,less odd but still old, bits of wood her Dad had made a cage for Stuart. He was cleaned out regularly with straw and hay from the pet shop, and sawdust from the nearby joinery yard. She went to collect the sawdust in an old, square biscuit tin that her mum gave her. The joinery yard was scary because of all the machines and the blades that cut wood. Not to mention the vans and the lorries. And she had to bravely ask the fierce man in charge if she could collect some sawdust for her pet. But Stuart’s well being was paramount and she loved him and so she overcame the fear. She was his guardian, after all.

She was subconsciously aware that caging an animal was to render it a virtual prisoner so she made sure that Stuart had plenty of opportunities to run free. That was not without peril. For once he escaped through the neighbours’ fence. He was only gone for a brief while but it felt longer and it frightened her. After that she made sure to only let him run on the larger expanses of lawn. He took to following her. In time she had another guinea pig, Scrappy,  as a companion for Stuart and her brother had one too, Lucy, in a separate cage. They knew their pecking order. Stuart would follow her, Scrappy would follow Stuart and Lucy would follow Scrappy. If she stopped so would Stuart and the other two would bump noses on respective bottoms.

Geoffrey, the cat, was jealous. Once, in an effort to try and mean as much to her as he thought Stuart did he squeezed himself into Stuart’s cage and if a cat was capable of sticking out his lower lip at her that was what Geoffrey was doing. If all the guinea pigs ran past him in the garden he would pat them on the head with his paw. He never hurt them. His claws were retracted. She loved him so much for that. He knew they weren’t mice or rats. He had that intuition, unspoken. Something between them that said I may be jealous of them but if I hurt them I hurt you and I won’t do that, for you love me and I love you.

Being with the animals made her happy. She decided that she would be a vet when she grew up. And when other kids were getting Saturday jobs she was helping at the local vets for free because she loved animals and you couldn’t put a price on love, could you? But she realised that actually being a vet wasn’t just about loving and caring about the animals. It was about dealing with people and running a business too, and making decisions that hurt her heart. So she knew she would never be a vet because it wouldn't make her happy.

The hard lesson she learnt in owning and loving pets was that they weren’t going to outlive you. Boundless love didn’t make them immortal. When Stuart died at the age of six she wanted to die with him. She had never in her life known such heartbreak. What she didn’t know then was that such heartbreak would not be uncommon in her life for the more you love the more you miss, the more you grieve and the more you hurt. The love for an animal was special. It was different from any other love. It rolled inside her like a giant ball bearing. Always there.

Now in her twilight years with no pets around her she could recall with ease all those who had shared their lives with her. She could weep for the six month old kitten killed on the road over thirty years ago, loving him no less for his short life than she did sweet Geoffrey who lived to be twenty one. She could feel the calico warmth of her shadow cat and she could feel the soft, silky head of her magical, black cat who appeared one day and refused to leave until death came to call, too. 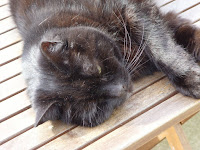 The love for an animal never ceased. It was always interrupted by death but it never wavered or faltered. Something so special. And whatever opinions might be as to whether animals possessed emotion she knew with an absolute certainty that she had been the recipient of an infinite love.