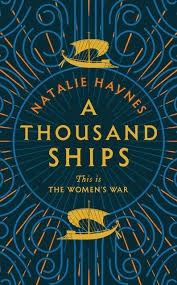 This year has seen no shortage of novels inspired by the Greek legends, Madeline Miller’s Circe and Pat Barker’s Silence of the Girls spring immediately to mind. They all emphasise the place of women in these tales from history. A Thousand Ships is no exception and an absolute delight to read. Now I’m a little late to the party with this one but some things are just worth waiting for,

At the heart of this tale is the Trojan war and Ms. Haynes’ take on it is to offer the premise that women suffer just as much as men in these conflicts. The most compelling argument looks at Paris’s’ wife Oenone who is overlooked by Homer who prefers to see Menelaus as the most injured party as Paris steals Helen, his wife. Paris leaving his own wife and child seems merely incidental. But all the women, goddesses and mortals, are given voice, given the opportunity to tell it how it was, or how Ms. Haynes imagines it, which I have to say is as convincing an account as any. I tried the Iliad once, it was all Greek to me. ;)

I feared it might be a heavy read that would demand my intellect remain on turbo power but it is a delightfully accessible book. An easy, narrative style that offers just enough detail without digressing too much from the womens’ stories to decorate our senses with superfluous imagery. Ms. Haynes creates a palpable sense of what it is to endure ten years of war and siege. These women have lost fathers, husbands and sons without losing themselves and their integrity and they are given articulate voices to express a grief that grips deeply. Unstated in concrete terms the reader is persuaded that it is not only lives and lands that are lost in war. Dominant, too, is the aftermath. Some terrible things to endure when you think they’ve surely endured all there is to endure.

For those familiar with Greek legends and the tales of Troy the bare bones of the stories are there. But the treatment they’re given is refreshing especially the contest between the three goddesses that set the whole damn Troy ball rolling. There’s something so contemporary about the writing that if they were here today they’d all be posting on Instagram and comparing their follower counts!  The variety of styles is also enlivening. I particularly enjoyed  the epistolary tongue lashing Penelope gives Odysseus in letters dripping with wit, sarcasm and resentment but also a potted version of the Odyssey.  But synthesising it all together is Calliope, the narrator, chief of the Muses, whose all too brief lyrical invocations delight the reader, well they delighted me, dammit! Oft quoted are the opening lines to significant and classic works, I’d like to submit the closing lines of this to go down in history as a perfect ending for this book.

I’d like to thank my local library for procuring a copy for me, even if I did have to wait for it. ;)
Posted by Bookphace at 15:27