Some bloggers dislike accepting authors’ offers of sending them a book to review. I have no problem with it. Sometimes I’ll politely refuse. And sometimes I won’t. My criteria is to go with my gut instinct. I did. And I’m glad. No, I’m downright delighted. For this debut novel has cut out the ‘debut novel exuberance syndrome’ middleman and presents as a mature, experienced, intelligent, compelling piece of writing. It was a Forrest Gump book, initially. I didn’t know what I was gonna get! But, boy, I got a lot! 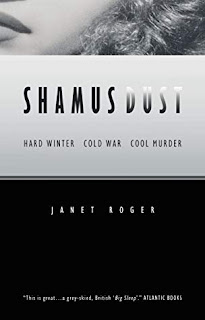 So you thought Raymond Chandler was dead, did you? Think again. Do you believe in reincarnation? Easier if you do. Cause I think he’s been reincarnated. He’s back with us, only now we call her Janet Roger. Think Sam Spade. Think Philip Marlowe. Think film noir. B Movie. American voiceover from old black and white crime cinema. Read this book in black and white. Don’t think colour unless it’s blood. Newman’s your man, scurrying along the fog ridden, snowy streets of London and the murky dives of dubious decency, lighting his cigarettes with careless panache. Shamus Dust. Racketeers and renegades, no dungeons and dragons. When I read the title I thought it might be a magical realism tale, a futuristic magic journey, a fantasy private eye. It isn’t. It doesn’t go there. Nor should it. It’s classic. It’s sophisticated. It’s something of an homage to gumshoes and Chandlers. It’s only the eggs that are hardboiled. It’s atmospheric. It’s descriptive. it’s relevant. Perceptive. No Gay Liberation. Potential police corruption. And it moves with a narrative so smooth and seamless, but such intricate plotting.  It’s a beautifully structured story. Straightforward, story telling. Nuanced. No need for clever devices, the storyline carries the whole book along. But read it carefully. All is significant. No wasted words or characterisations. Be a literary gumshoe, note everyone, their names and relationships, where they were, who they are and why. You’ll struggle to unravel it all. But leave it to Newman. He’s your man. Too many bodies? It's the risk you take. But I'll not risk any more spoilers.

The snow, a wonderful leitmotiv throughout the book. And the thaw only comes towards the conclusion. So clever. The research is impeccable and painstaking and accurate. How would I know? I’ll tell you. My Mum lived in that area of London until the Blitz bombed her out of the city. And we’re never far from the Blitz in Shamus Dust. I’ve walked down Gresham Street. I read the old news articles about the Roman Temple. In 1954 35,000 visited, 5,000 were turned away in one day and the queues snaked around those London streets including the one where my Mum lived.  The Professor knew it was a biggie. Who’s the Professor? Read the book.

So, the one thing that confounds me - how the hell is this a debut novel?! Where has this author been hiding? Shamus Dust is as accomplished a piece of writing as you’re likely to find. It ticks all the boxes. It’s rare to find a crime novel, an historical crime novel that boasts such elegant prose. No disrespect intended to the numerous crime writers out there whose work I have read and enjoyed but it is unusual for the writing of this genre to present with such a 'literary' feel. But if you want some objectivity, some kind of critical observation? I’ll grudgingly hand it to you - maybe the book was too long? But only maybe, mind.  Only maybe. And I want more Janet Roger books. Please.

Here’s looking at you.
Posted by Bookphace at 11:02