My turn aboard the Blog Tour for John Simmons’ Leaves!

Originally published in 2015 but conceived much earlier in the 1970’s where it is set this is a closely observed tale of a community, through four seasons, living in Ophelia Street.  I see Ophelia and I think Shakespeare. I think of Hamlet. I think of something tragic. And there is nuanced tragedy in this story. 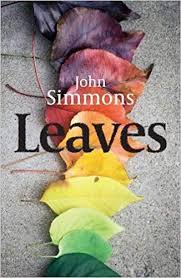 It’s slow moving, like the passage of time it describes. It’s a slice of life. It’s a cross section of a community of people who are real, flawed, some at odds with themselves, others at odds with the world, all trying to make their way in this confusing world we live in which was probably just as confusing in the 1970’s as it is now.

All is observed by a conservatively ambitious journalist who sees his neighbours, warts and all, and delivers columns of copy detailing thinly disguised anecdotes that he perceives from the window of his flat.

There are parallels to be drawn with the life we lead now which I found interesting, as if nothing about people really changes inherently, prejudices, morality, cruelty, love. Yet the book also shows how thinking has evolved and altered with the passage of the decades. Interesting though to note the reactions of readers born after 1970? I was a young person in the 1970’s and I can appreciate the attention to detail Simmons has paid. I could recognise artefacts and routines that are not about today.

Simmons creates subtle moods of unease and tension within the relationships of his characters. It seem to me to be very much an observational piece of writing with some sustaining prose, an attempt to create a piece of literature.

I enjoyed the structure of the novel; the seasons which were metaphor for the seasons of the lives of the residents and the life of Ophelia Street itself offered a subtle inevitability. The writing style is clear and focused, tending towards the lyrical on occasions.

What I didn’t enjoy was the graphic animal cruelty. I understand it was required to show aspects of character but it left me distressed. Bu I did enjoy the function of the frequent animal references in the book. I thought they were clever metaphors.

Leaves is not an uplifting book nor is it intended to be. It is a curiously disturbing book almost as if you have just read a book about yourself. But what you have read is a book about life. It’s a book we all feature in.

Please check out what other bloggers think of this thought provoking book. 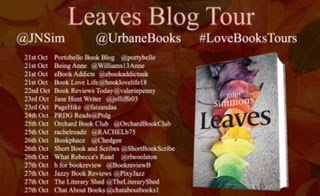 My thanks to Kelly at LoveBooksTours and Urbane Publications for a copy of this book.