My delight in kicking off the blog tour for this latest novel of Clio Gray's is hampered somewhat by the fact that, unfortunately, the book only arrived a day or two ago due to some kind of glitch that caused the poor tour organiser some headaches. Whilst I AM a voracious reader I do prefer a little longer, especially for a blog tour, to read, collect my thoughts and pen a review. However in my 'show must go on mode' I've done my best. Yet, mine is but the first stop on this tour, Please check out my colleagues opinions too. 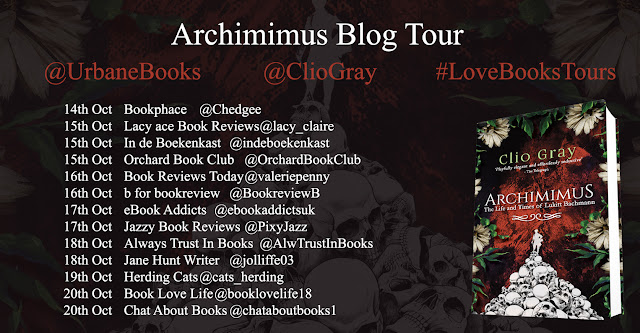 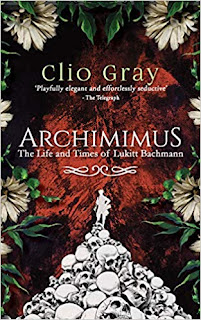 After cursorily reading the blurb I was prepared to deride the comparison with Patrick Susskind but I get it totally. Ultimately Archimimus is one of those genre fusion books that dares you to neatly compartmentalise it. Which suits me just fine! What I must be cautious about is giving anything away for the conclusion is explosive and, for me anyway, unexpected.

So let’s begin with all things blurbish -

‘Lukitt Bachmann is waiting in his Lanterne de Mortes, a Tower of the Dead, in the middle of a cemetery.
He's had a complicated life: son of a Herrnhuter Brother thrown out of his sect; help-meet to a pastor; sailor; fisherman; boar-hunter; and student and lecturer, exploring the varied histories of the Knights Teutonic and the bone-chapels their descendants left behind them.
He has become an assassin and a murderer, learned the terrible highs and lows of friendships made and lost, and is awaiting now his last remaining friend to set him free so he can put right past wrongs.
As Lukitt is let loose on a world gone mad, can this avenging angel finally find solace for his soul?

Yep, that just about sums it up. Or does it? Yes, that is what actually happens but the novel is much deeper and richer than a précis might suggest.

Lukitt is a deep and complex character, a paradox, and potentially symbolic of the eternal right/wrong demons that can reside within us all. A skilful characterisation has us warming to him, rooting for him and feeling his pain and dilemmas. But it also asks us to question his morality. Is he merely a survivor? Doing whatever he needs to survive regardless of what that might entail? Can he be deemed guilty of making wrong decisions, because that's what we all do sometimes  Or is he lacking sufficient courage to stand up to bullies and blackmail? Or have the events of his life shaped him into the Lukitt he becomes? I think it's up to the reader to decide. His close friendships with, firstly Pregel, and then Alameth prepares the reader for a wider consideration of friendship and what constitutes a good friend.

The novel is also a rich historic tapestry. Curiously I had no real sense of any historic period to begin with, I felt a greater sense of magical realism in the opening chapters. It was only as the story developed and the book progressed and dates were offered here and there that a sense of time and place became apparent and allowed me to slot everything into place. The research is impressive because it is seamless within the narrative. It rests alongside the story so that the reader is not unaware of it but accepts it as a plot function.

And the title? Archimimus? I looked it up before I was halfway through the book. This is what the world dictionary has to say -


archimimus is an Latin word started with a. Here is the definition of archimimus in English

However if I had been patient enough to wait until I read the author's note, her explanation enriches that definition most significantly.

I feel quite ashamed given the author's impressive catalogue, that this is the first Clio Gray I have read. I feel fairly sure it won't be my last. A gutsy, historical thriller with some subliminal semantics and metaphysics that are there for the taking but won't mar a readers enjoyment if they simply want a good old yarn.

I didn't like the ending! My heart hurt! But it was real. And clever. And unexpected.

My thanks to the LoveBooksGroup and Urbane Publications for a copy of this book.