The Murder of My Aunt - Richard Hull 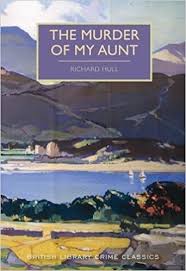 This is utterly scrumptious, if one can ever describe a book as such. Well I can and I have!! Originally published in 1934 this book is one of the recent British Library Crime Classics publications and a worthy addition to this wonderful collection. Again with a helpful foreword by the inimitable Martin Edwards this jewel of a crime novel has been polished up for contemporary crime readers to enjoy.

As a crime tale goes it is subtle in the sense that no police,no detectives, no courts and no judges so much as put in an appearance. And it is so funny!! Darkly funny to be sure but there is an absurdity and an almost off balance predictability that grabs the reader in its clutches. Edward is nephew to the formidable Aunt Mildred, keeper of the purse and guardian of Edward after the death of his parents. She is happily living in Wales, Edward is not.  She is the titular aunt and the story is about Edward and his desire to murder his aunt.

The bulk of the narrative is told in diary form, Edward’s diary and the writer cleverly develops Edward’s character through his diary accounts of situations and events and allows the reader to chortle away at the innermost workings of Edward’s mind. There are some subtly satiric undertones that are not always verbalised but offered to the reader to draw their own conclusions. And the conclusion of the novel is a delight, not unexpected if we’re honest but done so well that you’re happy you saw it coming and you haven’t been made a fool of!!

You can’t actually warm to either Edward or his aunt  but it doesn’t really matter because it means the reader can remain neutral and just enjoy the ‘antics’ especially of Edward as he bungles his away around rural Wales upsetting, possibly, everyone.

And of course the cover is another inspired addition, taken from a GWR tourist poster advertising Wales. Hats off to the British Library, they’ve done it again! Please don’t stop!!
Posted by Bookphace at 14:41