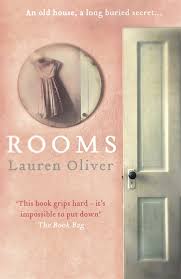 I’m delighted to be reviewing this book for a couple of reasons. One is because it’s another library book and I’m pleased with myself for maintaining my resolution to use my local library more regularly than I had been doing.
https://nudge-book.com/blog/2018/03/libraries-a-reflection-by-gill-chedgey/
Secondly I was thrilled to find a Lauren Oliver book.

I’ve read several of Lauren Oliver books intended for YA readership, spellbinding books of dystopian fiction. I love to see a writer diversify so this novel , her first novel for an adult audience, was a gem to find nestling on the shelf. A digression to be sure but I was actually seeking out some early Cassandra Parkin whose last two novels I’ve had the pleasure of reviewing. There were none on that day so rather than leave without borrowing a book I spotted this one.

Published some four years ago Rooms deals with grief, loss, identity the parent/child relationship and the desire for closure that the human animal craves. Prefaced by a Franz Wright poem of the same name I was also briefly reminded of the Bible, John 14 ‘In my Father’s house are many rooms…”. Each part of the book is a different room, quite a nice device. Some might describe it as a ghost story, but as it is not a frightening ghost story others might see it as a more spiritual affirmation of life after death.

The chain of events is precipitated by the death of Richard Walker Our main protagonists, ex wife, Caroline, daughter Mina and son Trenton are not, on the surface, especially nice people, hard to warm to them but they seem to have been formed by the path their lives have taken or not taken as the case may be. Blighted by the perceived shortcomings of Richard Walker their sojourn in his home unravels many secrets. Not all of them theirs, an integral part of the story belongs to the ghosts and the way the strands of all their stories weave together by the end is satisfying.

Oliver knows how to tell a story. And she does it well. There are some subtle, humorous undertones here. They need to be subtle for it is a sombre book overall, redemptive and vaguely hopeful in conclusion.  It’s slow paced story. considered and thoughtful. It’s not uplifting, in fact its downright sad in places but its in the careful hands of Lauren Oliver so it is steered in the right direction.