In which the blogger does try to fashion a review. 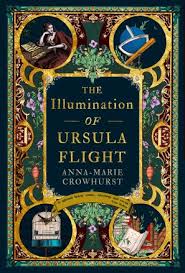 I adhere to the adage that you can’t judge a book by looking at its cover but I might make an exception here. For the cover is a delight and prepares us for what’s inside this delightful debut novel from Anna-Marie Crowhurst. It is one thing to write historical fiction, many have done so successfully and convincingly but this book swallows up its reader and deposits them very firmly in the seventeenth century. It is as if you are truly there . Now that may be down to the fonts used and the wonderful design, format and layout of the book, it certainly helps without a doubt, but t’would be a disservice to this writer to credit the success of this book wholly to that. Ms. Crowhurst writes with an exuberance so often a feature of a debut novel and overdone in many instances but here it all works so perfectly. Using several devices, diary, letter and play scripts, we accompany the young Ursula on her journey to maturity.

For this is such an enjoyable book, warm and witty even when the going gets tough for Ursula, our heroine. And what a heroine she is! It’s a restoration comedy that romps along barely giving the reader time to breathe. Ursula is a breath of fresh air. A modern woman of her time, she possesses such spirit and resilience that she pushes this story onwards to its satisfying conclusion.

The buoyancy of the book must surely belie all the hard work and dedication that has gone into its creation for it is more than a straightforward, meticulously researched historical fiction. The basic premise of an arranged and unsuccessful marriage is not a new one but it is a feature of that age and has fired the imagination of many a novelist. It’s how a writer takes a basic premise and develops it that elevates the book. Using the vernacular of the age so consistently throughout was a joy to read. The authenticity of the descriptions flowed and convinced.

I don’t think there is anything I didn’t like about this book. From Ursula’s birth on the night of a ill omened comet to her ultimate triumph in pursuit of her goals, this coming of age story will uplift you and if you’ve avoided historical fiction up to now, think again, and maybe take a chance with this story. It really is fun.

My thanks to Readers First for the opportunity to read this delightful story.