The Girl Before - JP Delaney 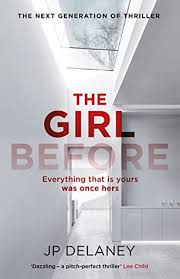 This is described as a debut work but that is a little misleading as the writer has apparently written best selling fiction under other names. It seems to be a debut for this genre, namely, psychological thrillers. I have resisted the temptation to see if I can find out JP Delaney’s other names and works but that would kinda spoil the mystique and I’m enjoying the mystique.

This book also belongs to another genre - the unputdownable genre. I found the premise highly original for the most part and reviewing this is going to be hard because I really don’t want to give anything away at all but there’s so much to delight in that I run the risk constantly.

So firstly let’s get out of the way those things that I didn’t like. Although the writing was far, far superior there were times when I was reminded of Fifty Shades of Gray. Maybe it was the control and obsession aspects. Also there were one or two plot holes but I ended up forgetting all about them because the rest was tight. The final denouement was one of those lovely climactic twists  and the wind down was a little anticlimactic until you reach the very last chapter. And that’s all. That’s all I didn’t like.

It’s a very clever, very well written thriller. I understand there’s a film in the offing and I think it will translate extremely well to the big screen. It’s descriptive both in terms of the physical descriptions of locations and artefacts but also expressive in terms of emotion and mind states of the characters.

It’s a dual narrative structure between the two main women, Jane and Emma, so the story unfolds from their perspectives. And of course, as is almost obligatory now within this genre, the flawed narrator technique is utilised most cleverly here.
We are fed red herrings, led down garden paths until our, usually, razor sharp, thriller unravelling minds are tied in knots.  It’s most satisfying in that contrary way that these type of books provoke. My suspicions were aroused and thwarted throughout and all the clues are there if you care to look for them. The characters are flawed and real. We are putty in the hands of the writer as we are manipulated into believing and feeling one thing and then another in regard to them. Cleverly forced into positions where we are so convinced  we know what they about, our beliefs are unshakeable - until the next twist. There are no superfluous characters, in fact in keeping with the ethos of One Folgate Street there is nothing superfluous in this book. The house itself is also a character..

Well, I think I may have managed it. I don’t think I’ve given anything away. I do hope not and I apologise if I have. There’s a lot of buzz and hype about this book. Often that’s the first thing to put me off it. But I actually think it is justified here. But, hey,  don’t take my word for it. Read it for yourself.
Posted by Bookphace at 13:46