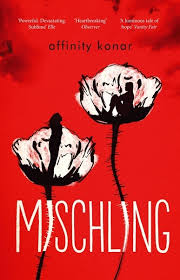 Is it my imagination or are fictional works about the Holocaust on the increase? I’ve always believed a writer who tackles this subject in a work of fiction extremely brave. There is just no room for sentiment or poetic licence. So any author has my admiration right away. Books like these can be difficult to read. More so if you have ever visited Auschwitz, both the main camp and Birkenau. There is a tangible evil that chills you. Stories of hope and positivity are few and far between. For every survivor account you hear of you know how many did not survive. I believe the point of writing such a book as this is to perpetuate the knowledge of the Holocaust in the vain hope that such genocide will never happen again.

This novel focuses upon a specific atrocity of the Holocaust, Josef Mengele and his barbaric, sadistic, experiments. Obsessed with studying identical twins, and eye colour the two protagonists of this story are twins Pearl and Stasha. The book gives them voice with alternating chapters. Ms. Konar’s research is thorough and those students of the Holocaust will recognise descriptions that echo the testimony of Eva and Miriam Mozes and Helen Rapport and Pearl Pufeles who survived Mengele’s cruelty. (Is Konar’s Pearl based on this Pearl?) In a sense there is no new ground covered by this story rather an interpretation of how victims might act, react and interact in the face of such abominable treatment. Initially I found my self puzzled by the twins as they seemed much younger at times than they actually were and I’m not sure if that was intentional to suggest that age was of no consequence to Mengele. Pearl and Stasha could be wise one moment and childish the next but in an unbalanced way. You could argue that their circumstances were enough to unbalance anyone.

The prose style is eloquent, descriptive and expansive which for me doesn’t quite work with the subject matter. It’s a bold move and I celebrate the attempt but you cannot make music where there is so little harmony.

For readers ignorant of anything more than a general understanding of the Holocaust this is a shocking, disturbing read. And so it should be. It isn’t a book to be enjoyed. It’s not a pleasure to read but it does suggest that we should never stop looking for hope and redemption whatever the circumstances.