The Turn of Midnight - Minette Walters 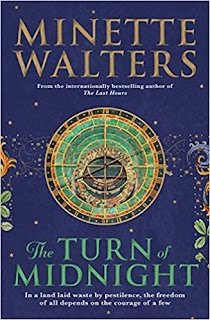 I was fortunate enough last year to receive an ARC of The Last Hours which I found vey exciting. A long time fan of Minette Walter’s psychological crime thrillers I was fascinated to see how a writer deals with a genre change. Very well in fact! After I finished it I was aghast to see how long it would be before the next book in the series and I jokingly asked for an advance advance copy!!

Unfortunately the older you get the quicker time passes and here I am with the next book on the cusp of publication. Where did that time go? But for once I’m glad because I was so excited to read this second book. Another aspect of getting older is memory!! And how elusive it can be. I struggled momentarily to remember the details of The Last Hours. But I needn't have worried because this writer cleverly offered a character rundown which was effectively a synopsis of the previous book. This served two purposes in that it was a good reminder to readers of the previous book and it renders the book perfectly accessible to those who missed The Last Hours.

It took barely a page or two to transport me back to the Middle Ages and the scourge of the Black Death. And I quickly reacquainted myself with the key players, mostly Thaddeus Thurkell and Lady Anne. The interesting thing with reading a sequel is to see how a writer sustains the characters introduced in the first book but also how they go on to develop them in the next. Thaddeus is already a large man but he seems to grow in this second book. As do those who were boys at the end of The Last Hours but have become men by the end of The Turn of Midnight. Lady Anne contains to shower the demesne with her wisdom and sagacity. Almost too good to be true, is her Achilles Heel Thaddeus himself? The volatile Lady Eleanor has her part to play in this compelling narrative.

The historical research is authentic and convincing and the writing so tight that it is easy to imagine all the action that ensues down to the last detail. It’s all so well described. Ms. Walters is a master of her craft and the reader is drawn in carried along with the narrative flow. It’s story telling at its very best. Whilst it’s not exactly action packed, in fact this book is more cerebral than the last with the protracted inquiry towards the conclusion of the book where the indomitable Lady Anne ties her inquisitors in knots, but there should be enough to satisfy those who enjoy a conflict or two. But I will say that I found the concluding chapters overlong to a degree although there was a need to tie up ends. That being said I found the ending inconclusive in terms of there being a continuation of the story. It’s quite opened ended. The story of Develish surviving the Black Death and all its ramifications is concluded satisfactorily. But the story of Lady Anne and Thaddeus Thurkell? Well, that could be another story……

My thanks to Readers First for the opportunity to read this absorbing novel.