An Interview with Ana Sampson McLaughlin

Ana Sampson McLaughlin is a lady with several hats. Fellow bloggers may well know her as Deputy Publicity Director at Quercus books, sending out books, arranging blog tours and facilitating author interviews. She’s a Mum and those who follow her on Twitter will have smiled at her ‘What are you eating, Mummy?’ series, and her anecdotes featuring errant mermaid pens, fox poo, and lost car keys will have had you chuckling and commiserating in the same breath. But today on my blog she wears yet another  hat, that of poetry enthusiast and anthologist. 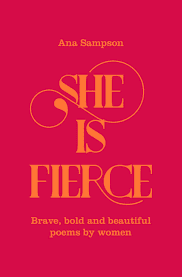 Her recently published anthologyy She is Fierce, is a comprehensive compilation of poetry by women.
Reviewed on my blog last month the volume continues to delight me. Given how busy she is I was thrilled that Ana agreed to let me interview her. So without further ado……. an interview with Ana Sampson McLaughlin.

Firstly, thank you for She Is Fierce. It sits by my bedside to dip into, especially when I can’t sleep!  It has flicked my poetry switch to ‘on’ again which has been unexpected but quite delightful! I’ve been thumbing through my poetry collection and even started scribbling away again myself. And so my first question is to ask if you write poetry yourself, now or ever?

I am SO HAPPY to hear this! It took a long time for my poetry switch to flick back to ‘on’ again after studying English Literature to be honest – I had lost sight of the pleasure of poetry. And on the bedside table is a position of honour for any book, so I’m thrilled to hear it’s there. The more poetry I read, the more in awe I am of the people who can write it. One of the greatest thrills of putting this book together has been having the opportunity to meet some of the women whose work is included – I consider them to be actual magicians and am embarrassingly fan-girly! I wrote terrible poetry in my teens (didn’t we all?) but now I think it’s best left to the professionals.

It always seems to me that a poetry anthology is one of the best ways to make poetry accessible to a wider audience. People will possibly pick up an anthology rather than a volume by a single poet. Especially a themed anthology like She is Fierce. You’ve produced several anthologies already.  And I’m wondering where the initial idea to compile one begins? Is it a clear decision? Or does it evolve in another way, from reading poems incidentally that maybe that suggest a theme?

Most of my other anthologies have been quite general – ‘greatest hits’ volumes, if you like – apart from Poems to Learn By Heart which had a specific aim to gather poetry I felt would be useful in your mental armoury. In the case of She Is Fierce, the idea came because I wanted to read an anthology of women’s poetry and I couldn’t find anything broad and accessible that covered many centuries. That seemed an incredible omission, so I decided to fix it!

Compiling an anthology has the potential to be an underrated achievement, much like the curating of an art exhibition. People don't always consider the work that has gone into, not only selection of poems but also how to arrange them in the best possible configuration. Could you tell us a little about how you go about both aspects?

I read and read and read and read! I think I read a couple of thousand poems, and I post-it noted everything that moved or intrigued me. From those marked poems I created a (very) longlist, and divided this into themes – not always an easy job as one of the great pleasures of poetry is that it can talk about many things at once. I also discovered recently that a poem I had read in one way – as an adolescent, spreading her wings – had actually been written at the end of a grown-up relationship – so is perhaps in the wrong section, though would speak to people in both circumstances, evidently! The skeleton of the book changed a few times, with themes merging or disappearing altogether. Then I had to cut down that longlist – which was agonising. When I had a final list of poems in each chapter, I printed them out and read them both to myself and out loud, shuffling them until the sections felt right. Some chapters suggested their own order – ‘Roots and Growing Up’ moves from childhood through to grandmotherhood, for example – but in others the rhythm was something I had to carefully consider.

I would imagine, but correct me if I’m wrong, that for all the poems that made it into the anthology there were hundreds that didn’t? Was it difficult deciding which can go and which can stay? Did you have any kind of criteria which helped you make the decisions?

It was awful! I lost some real favourites and cut enough poems from the longlist to fill another whole anthology. I didn’t want to include too many poems on the same theme, or by the same writers, or that expressed the same feelings, and wanted a good range of voices from different eras and walks of life. There were a couple of poems I originally wanted to include that we couldn’t clear permissions for, and one that had to be expelled for swearing, as we wanted the book to be suitable for secondary school readers and didn’t want to shock the school librarians!

Following on from that I guess, poetry is such a subjective art form, I think so anyway. Did you allow your own subjectivity to influence your choices. Or were you able to objectively select a poem that didn’t speak to you as much as others. I suppose what I’m asking is do you have to love every poem that you decide to place in a themed anthology?

Poetry is personal. I think it is very subjective, and I love everything that’s in here – so I’m extremely relieved to see that readers seem to be enjoying the selection too so far! Some of the poems speak to me more than others of course – the ones about motherhood particularly moved me as I have young children (and actually my editor had to stop me from putting in double the number of poems in this section!). I know from experience that my tastes and what strikes a chord with me will change as my life does. I so hope there is a wide enough selection of themes and styles here to offer something everyone will love.

I thought you struck a fine balance between deep, metaphysical poems at one end of the scale and the more light hearted poems at the other?  Was that difficult to do?

Thank you! That was definitely my aim, and hopefully there will be something to suit whatever mood you’re in when you pick up the book. It wasn’t too difficult to do because – even though they’ve been rather ignored in traditional anthologies – women have written such an enormous wealth of amazing poems, so there was so much material to choose from. I just had to go looking for it, as it has been rather sidelined especially in earlier centuries.

When I read poetry I find that instinctively I start to read it aloud. I won’t say that never happens with prose but it’s rarer. When you are making selections do you read the poems aloud? Does the spoken word aspect play a part in your choices?

Reading poetry aloud is one of life’s great pleasures – as is hearing poets read their own work. You really get to feel the beauty of the language and the rhythm that way and I always hear something in it I didn’t get from the written word on the page. There is an audiobook of She Is Fierce and I bought it myself to hear the poems read by the supremely talented Adjoa Andoh – I loved listening to it on my walk to work, it felt like a really mindful and relaxing way to start the day – and it really brought the poems to life. When you read poetry out loud yourself, it makes you slow down and properly chew over both the feeling the poem gives you and its meaning.

I notice that on Twitter sometimes someone will post a poem and potentially many people may read it, on their commute maybe. Do you think that Social Media and maybe the Internet as a whole has offered a broader platform for people to access poetry?

Definitely. I love that poems are going viral now – it just goes to prove how eloquently poetry can communicate. Short poems lend themselves well to being shared on social media and I discovered both Nikita Gill and Yrsa Daley Ward through their Instagram feeds. Hera Lindsay Bird’s poem about Monica from Friends was everywhere online and led me to read her brilliant books and Hollie McNish’s poem Embarrassed makes a serious point about breastfeeding in a way that really caught the imagination of everyone who posted and shared it.

I don’t think I can remember the first time but I definitely cried a lot editing this anthology. I had whole days of reading poetry which was the most wonderful job in the world but occasionally a little emotionally exhausting! It turns out I am a real poetry crybaby and – actually – I hope some of the readers of the book have a little cry at one of the poems too.

And finally having been inspired by this anthology so much I’d like to ask if you have another in the pipeline? Or if you answered ‘Yes’ to the first question, a book of your own poems?!

Definitely no book of my own poems I’m afraid! But I am thinking about ideas for the next anthology though nothing is set in stone as yet. Watch this space!

I certainly will!. Many thanks to Ana for this fascinating and insightful interview.