The Year of the Knife - G.D.Penman 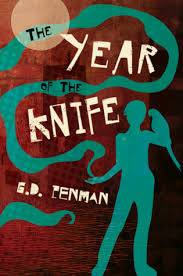 And the 2017 Award for Speculative Fiction goes to - The Year of the Knife. Joking I am! I’m not even sure if there is such an award! But knowing nothing of G.D. Penman before I received this book led me to do a little research. And I found that he writes ‘Speculative Fiction’ . A term I love. I remember Margaret Atwood using it to describe The Handmaids Tale in preference to Science Fiction and it’s been a term I’ve enjoyed ever since. So that endeared me to this novel of Mr. Penman’s from the off.

I found the basic premise original. The police using magic to solve crimes. It has probably been done before but I cannot think of an example off the top of my head so I’ll stick with finding it original.  I’m loathe, as ever, to detail much about the plot as I am obsessively paranoid about offering spoilers. But Agent Sully ( and that set off a memory of Agent Scully and the X Files, not to mention Monsters Inc. and Tom Hanks!) is a kick ass heroine, a kind of adult Harry Potter meets Katniss Everdene and is the tour de force that drives this novel along. Accompanied by her extraordinary magical abilities she is an exciting character. So exciting that the others faded in comparison despite fulfilling their various functions.

There’s everything for lovers of the supernatural here; vampires and demons, magi and witches, spells for every possible situation. I found it a very visual book, I could even imagine video games.
The writing is fast paced, imaginative with an underlying intelligence that gives credence to the infrastructure of the magical aspects of crime and policing. There’s even a little supernatural history and politics thrown in for good measure which adds more depth to the book. There’s much action, some gory, more than a little humour and  a conclusion that possibly paves the way for another Sully story.

This isn’t a book for everyone. If you’ve a penchant for realism and plausibility you might not derive as much pleasure from it as a reader who has a fertile imagination and a love of things magical and supernatural. I am possibly over endowed with those latter qualities so I enjoyed it! Thanks to Nudge Books for the opportunity.
Posted by Bookphace at 12:50