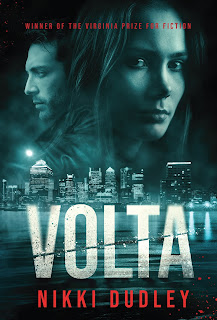 It’s not often I cry when I’m reading a crime/psychological thriller. Actually that’s a fib. Often doesn’t come into it. I’ve never cried reading one before! But I did here. There’s one really, genre transcending, moving moment. But there are moments a many in this thriller which won last year’s Virginia Prize for Fiction.

‘When Briony Campbell confesses to killing her boyfriend, a straightforward crime of passion soon turns into a baffling mystery. Haunted by demons from his past, lawyer S.J. Robin is assigned to the case. But as confusion - and the body count - rises, he's forced to question who is guilty and who is innocent. Can he see justice served and hold on to the woman he loves?’

It’s a story to make you think rather than taunt you with edge of the seat, white knuckle action although it’s not without some tense moments to say the least. The two main characters are flawed individuals -  flawed is maybe an understatement for at least one of them! The reader is treated to hints and snippets of what may or may not have happened in the past which has fuelled the present day lives of Briony and S.J. We are almost invited to be amateur psychologists as we are allowed to observe our two protagonists and form our opinions as realisation, like a drip feed, is offered to us throughout the progress of the narrative. I guess the clue is in the title - ‘volta’ - Italian for ‘turn’. I’ll say no more than that for fear of offering any spoilers. But it all makes for a substantial mystery.

I always find it interesting when a female writer presents with a main male character and seems to understand so perfectly how that character will react and interact in the book’s given situations. It demonstrates an encompassing perception of the human condition. I found myself warming to S.J. more than Briony. Their similar pasts, leaving them both damaged, had led them down divergent paths.

But for all that it is a mystery, a thriller, I found it multi themed even heading ‘chicklitwards’ in some sequences!  There is much about relationships on several levels, friendships, self perception, not necessarily accepting things at face value, so it’s a substantial work. The dynamics of relationships is subtly explored as S.J becomes involved with a friend’s sister who also happens to be a counsellor. It’s a multi narrative with S.J’s first person recounting and the other characters’ third person perspectives. It’s one of those stories where as a reader you think you’ve joined the dots but you’re never quite sure, that element of doubt runs through the fiction until the conclusion where it’s all tied up, not nicely exactly for it’s not all happy endings but you are not left with ends untied.

Nikki studied for her BA and MA at Roehampton University. Her dissertations focused on changing her writing practices, experimentation and the long poem. She grew up in inner city London and attended state school in Camden. Nikki has been in love with words since she wrote short stories in her scrapbook at primary school and discovered what a metaphor was.

Streetcake magazine and prize:
Nikki is Managing Editor of streetcake magazine, which she started with Trini Decombe in 2008. streetcake publishes an online issue every 2-3 months and in 2019, launched the streetcake experimental writing prize for 18-30 year olds, supported by the Arts Council England. The prizes include mentoring from published writers, personalised feedback and developmental support, publication and book bundles.

My thanks to Nikki Dudley for a gifted copy and to Isabelle Kenyon at Fly On the Wall for a place upon the blog tour.